About FreeOffice - it's not being installed by default

I listened to the Jupiter recording tonight, very interesting topics and not just about Manjaro+FreeOffice. Good interview! It did clarify a few points for me though as did this discussion topic. I'm going to listen to that show though from now on, it's enjoyably informative if that makes sense.

@Frog the large ISO could be an additional offering rather than replacing the separate DE offerings. Other distributions already offer this.

Yes, he tried WPS, and it didn't do as good a job on some of his files. I know WPS is supposed to be really great for that, but I found with some of my own older doc files that Libreoffice actually handled them better... Who can figure...

I'm going to listen to that show though from now on, it's enjoyably informative if that makes sense.

Hopefully this whole issue will calm down now...

Oh look ... who would have ever thought to say 'hey this is an RC .. please wait .. it wont be default .. stop going crazy .."
Oh yeah - everyone who missed tinfoil day.

Sorry folks this isnt about 'listening to the community'.
I think If I had done that I might have walked off a cliff.
This is how the process works - and was always aiming towards goals like this.

The pats on the back go not towards 'listening' but towards a reasonable team and development process, in this case, despite a large section of the 'community'.
[heck a lot of that community could do better with 'listening']

I hope some will attempt to remember that..

The original announcement was not clear on that point . Going forward perhaps more care needs to be taken with the wording of announcements like this and maybe some of the team with a stronger foundation in the english language can assist with that .

Hello community, I am happy to announce another Testing Update. Mostly we have XFCE, Kernels and Haskell updates with this one. Manjaro Hardware [image] With the new Premium BIOS, you have the opportunity to make various profiles for chipset-specific settings and components in order to be able to operate the device optimally depending on the application on Tuxedo hardware. Find out more here and stay tuned for the announcement of our new Manjaro Laptop we will launch together. Support of …

I agree with this as well (and jonathon alluded to it)
But still - every other comment from anyone closer to the project (and certainly aside from the cornucopia of trolling) attempted to clarify and assert statements such as those gathered together in this thread. They were combined and quoted and repeated from day 1 - some chose to ignore and keep trolling and FUDing. Which is fine - no one even shut down the talks until they reached ridiculous levels. Im just saying it was said. Many times.

Agreed , there will always be some that will not get it regardless . Nothing you can do about that .

Nothing you can do about that

Other than to surreptitiously electrify their keyboards...

The biggest problem was there where a handful of "Trolls" that just kept hijacking other topics or re-opening new topics so they could troll some more. Those people know who they are. Reading through several of these threads on this topic it doesn't take a rocket scientist to see there was only really a handful of people whose names kept popping up on every thread regarding the topic using their circular arguments and unsubstantiated made up facts to incite chaos rather than have any kind of meaningful conversation on the topic. These people did so even after they had the facts, they just kept trolling over and over again jumping from one thread to another.

Well, all this was possible only because of the initial collaboration initiative, and only the constructive critiques got things better:

Softmaker are making changes to the free edition of their office suite .

Calamares as it will now allow for different package selections on install .

some chose to ignore and keep trolling and FUDing.

So each side in this debate can then be accused of "ignoring" the other. Maybe I'm biased (being opposed to the move myself), but I think even an objective read of the opposing posts will yield a considerable allusion to the fact that they are opposed to the promotion of a proprietary software, not just it's existence.

Promotion - as in, for example, putting it as the default (even if only to have it tested - why are we providing free testing services to a profit-making company?). Promotion - as in including it as a choice of office software where the dozens of other paid alternatives are not.
Promotion - as in providing market research feedback on their product.

As I understand it, people (some, at least) are questioning why Softmaker are being promoted. No announcements about free choice, or changes that Softmaker are making to their product address this issue in the slightest. I think most peaople already know that Manajro (and Arch) are not FOSS only platforms. It's not about simply having a non-FOSS product available though is it? So detractors are not "ignoring" announcements. People simply want to know (and unless I've missed it, still remain unanswered on) why this particular company are being promoted by what they (quite fairly) think of as being, at least in part, their OS.

Is it so hard to imagine that a community which acts as testers, documentation-writers, support staff and even occasional coders might feel they have some communal ownership of this project (even if only in name)? And that such a community might have some strong feelings about their efforts being put towards promoting someone else's profits?

Thanks for the clarification. 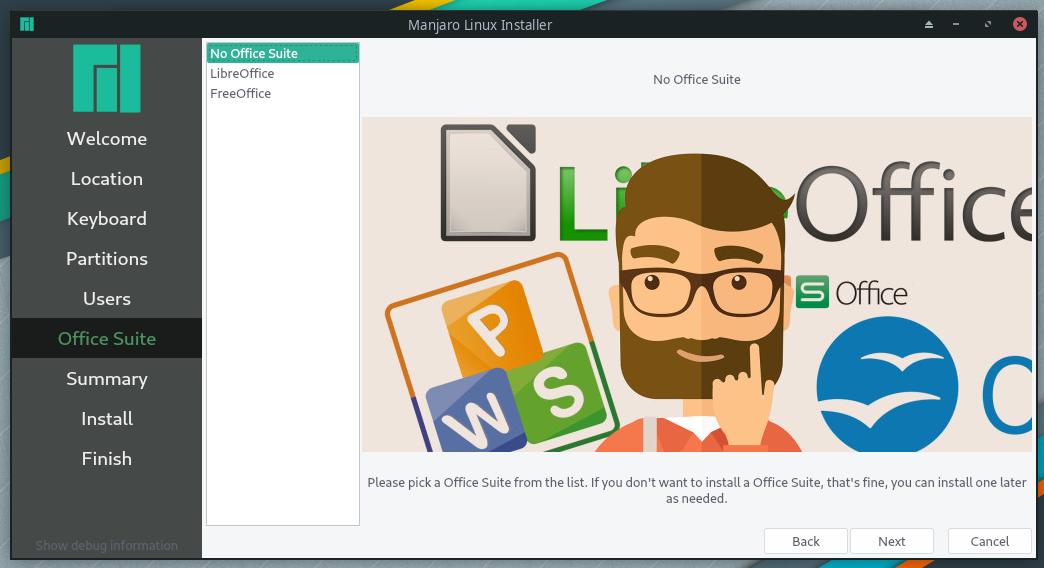 We have a small update on the OfficeChooser we will add to our Manjaro 18.1 Installer. You can choose now between "none", "libreoffice-still" and "freeoffice". RC7 can be expected soon. @softmaker_com
8 Likes
oberon 4 August 2019 08:35 #87

MS Office Online I see more as a wrapper to access remote software that users are subscribed to. So not 'really' as an Office Suite installed.
To have fully functional and compatible software installed natively (and usable offline), combined with access to your documents that may be used elsewhere in a windows environment, that looks pretty ideal to me.

made for elementary os using granite

Thanks for letting us choose! thats awsome news. Manjaro remains my distro to go if i have to recommend it to some one

My understanding is that most gripes do not even have that depth of understanding...
but hey, thats just what I've read ...

People simply want to know (and unless I've missed it, still remain unanswered on) why this particular company are being promoted by what they (quite fairly) think of as being, at least in part, their OS.

This has been answered in the most crude way I can imagine - literally philm said they are close and talked to them. thats pretty much it. there is easy acces and an interest. based upon this interaction they now will provide better softwafe for everyone. I really dont get the issue ...

literally philm said they are close and talked to them. thats pretty much it.

There are a half dozen companies within walking distance of my office. I don't use my business assets to freely promote them all simply because of their proximity. Unless philm is randomly approaching companies with a similar address I can't see how this constitutes an explanation. As I've mentioned before, there's a difference between and explanation of what happened and a description of what happened. It's the former I think people are after, the latter seems to be what has been provided.

I really dont get the issue ...

I can completely understand how you might not agree with the issue, but I really can't see how you could still not get the issue after it has been so exhaustively explained.

Manjaro is an asset which has been built (partly) on the contributions of a community of people (testing, documentation, support to new users etc). That community feels like they therefore have some moral, if not financial, ownership of the asset. Many in that community do not want their asset used to enhance (by advertising, testing, market research or other) the profit of a private company. What's not to get?

I'm sure many people have a very different set of reasons why they don't like the move, I'm not trying to claim they all have the view I've expressed, but it's a perfectly comprehensible one.