We are habituated to use Windows. We can create separate disk partition after installing windows like Drive D, Drive E, Drive F etc. Is there any option to create such type of disk portion in Manjaro os? Can we create separate drive like storage space after installing manjaro os ??
Please help me. I am very much excited about this OS. Please explain the steps if do so. It's really urgent.

Hi!
Sure you can, If you already have those partitions, you just need to mount them.
if you want to create those partitions just open partitionmanager, gparted,parted. Every DE have they own application, practically all are the same app just a different name in any DE

Thanks for your response. Can you explain the mount process with some screenshots?
Actually I am a new user of linux. Can you guide me?

My favourite noob tool is gnome-disks.

As an experiment, you can simply plug a drive into a SATA and boot the system to see what it does by default... open gnome-disks and see what it's doing (also you can look at the text file /etc/fstab and see how it correlates).

You can select a volume, then look at 'edit mount options'.

For example, you buy a 4TB disk, want some 'data' and some 'backup' space. Select 'show in user interface' with mount point /mnt/T4 and identify as 'LABEL=T4'.

If you partition the drive, you can mount each part as '/mnt/Data' and '/mnt/Backup'.

Then you can see your disks in the browser as separate devices with those names - better than arbritrary 'A B C'.

You can create multiple partition.

On Manjaro (and Linux in general), when a partition is mounted, you do not have letters like in Windows assigned to it (like C:, D:, F:, etc.).

In Windows, if you want to access to files in a particular partition, you start with the letter corresponding to that partition, for example D:\Stuff\Garbage\[...].

On Linux, there is only one "path tree" (if we can call it like that). Partitions are mounted in directories of that "path tree". You have at least the root partition, which is the partition that starts at / (and doesn't have anything else belonging to other partitions). Then, you can have a second partition that starts at /home, which would contain every files that have a path like /home/[...]. Then, you might have a third partition with /var as the mount point, which means that every files with the path /var/[...] will belong to that third partition. Now, for example, in which partition would the executable file /usr/bin/pacman in that case? Well, since it is neither in /home or in /var, it will be in the root partition.

Here's my partitioning on my Manjaro system, with four partitions. Notice that I also use three different drives to store my files among those partitions.

Here is a nice little video showing how you can use gnome-disks to automount a partition (without manually editing /etc/fstab config file): 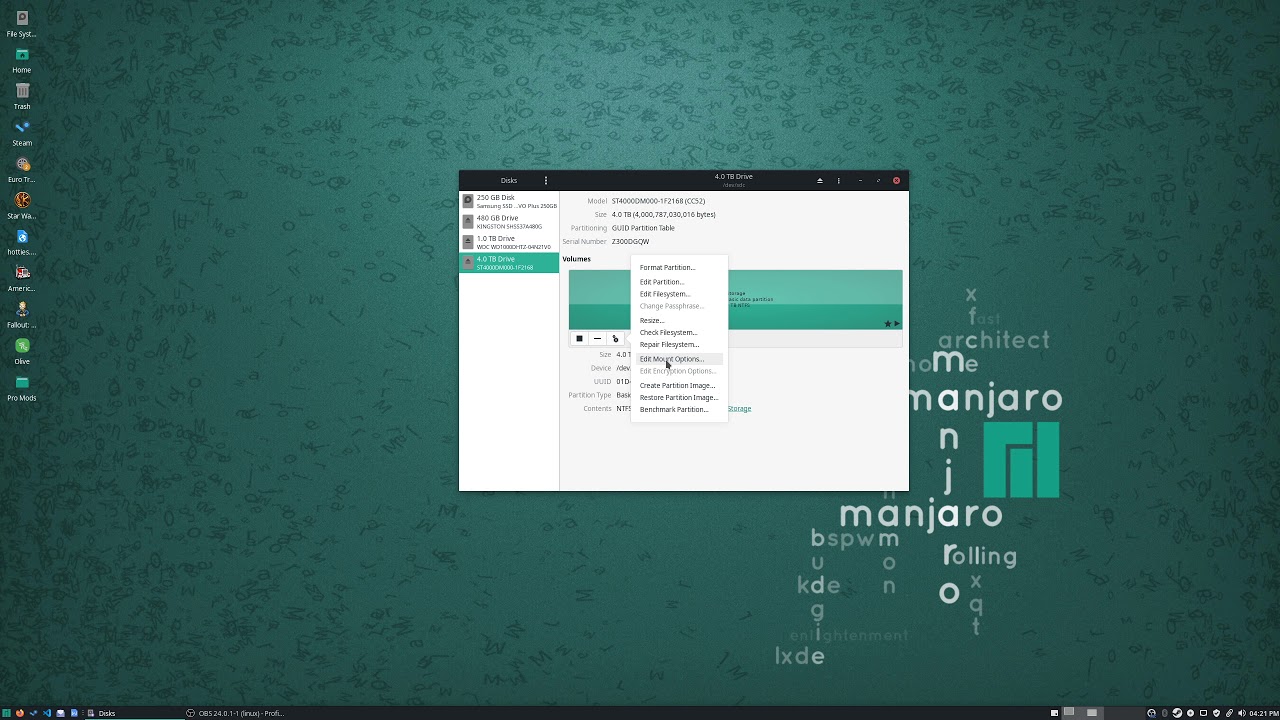 We are habituated to use Windows.

Speaking for yourself of course, others not so much.

How do I go about giving access to files on that seperate partition to installed applications? For example Android Studio has problems accessing my project directory which i keep on a seperate partition with all my important files.