An interesting article on Firefox and built-in cross-domain cookie blocking.

One argument - mentioned in the article would increase the load times of the very page that hosts the article.

According to my ABP - 148 ad were blocked on the following article.

If you haven’t already switched to Firefox, do it now

Firefox has announced plans to block all third-party trackers. Why haven’t you switched yet?

In short it its web design with the ultimate goal of getting you to make the wrong decisions. I recognized a lot of the samples as the ones I have trained myself to see for years.

Dark Patterns are tricks used in websites and apps that make you buy or sign up for things that you didn't mean to. The purpose of this site is to spread awareness and to shame companies that use them.

Thanks for the link. Since Firefox no longer pulls in gtk2 and Netflix works with it now without extra packages, I think I'll be switching bspwm edition from chromium to Firefox. It is lighter anyway... For a good while it felt that Firefox was playing catch up to chromium (in meeting my personal preferences), but it has finally caught up and passed it. Yay!

I've been an avid Vivaldian since 2015, but decided a few weeks ago to migrate to FF61. In most respects i am very happy with this decision, & have reversed my years-long prejudice against FF as having been slow, narrow, out-of-touch, boring. Though it's taken effort & time, i have found a suite of good Add-Ons to cover some of the native functionality i so like in Vivaldi, hence my workflow is now liking the new FF in a similar way to Vivaldi.

Now i find myself wondering... have i been stupid for trusting FF, & do i need to "unmigrate"? Use the lightweight Firefox extension to enhance the security of your connection. Adds another layer of privacy everywhere you use the Firefox Browser.

Thanks! Care of nice info from @cimarronline i've just tested & verified success with https://addons.mozilla.org/en-US/firefox/addon/open-link-in-sidebar/ [an exceedingly timely update of it today includes a context-menu entry to open saved bookmarks in the sidebar]. This now reinstates the viability of FF for my optimal workflow, & so i can re-upgrade now to the latest Dev version. It also means this AO's Link's name is fundamentally inaccurate, btw, albeit the AO itself is just called Open in Sidebar which is more accurately encompassing.

"Your" alternative looks initially wonderful, given it claims...

Side View shows sites in a mobile view so they fit in a smaller space.

If true, that would make it better than the OiS AO [as that uses the standard desktop site in the panel, at least, for those sites i've tested so far], & thus more akin to the Vivaldi WebPanel function. However i am loathe to actually install & use it, given the potential privacy implications [notwithstanding the FF TestPilot assurances]. Also, its very name [Side View Firefox experiment] implies a degree of ephemerality to it; FF Devs might remove it next week/month, just like the previous inbuilt function i've whinged about.

Does anyone know of an addon that will shrink the tabs to fit the screen instead of having to scroll the tabs? Tab mix plus used to do that but since Firefox changed it doesn't work anymore.

No i don't, & i agree with your sentiment.

I have a kinda thinking-outside-the-box sorta-part-workaround idea. Today i saw this https://github.com/Aris-t2/CustomCSSforFx, & one 'about:config' mod in it is:

Maybe you could experiment with progressively smaller values in hope of finding a "sweet spot" compromise, when with a larger number of tabs open than now they still all fit without scrolling, yet are still big enough to actually recognise?

I have not actually tried this myself yet...

I will check this out. Those tabs running off the screen drives me crazy. I could deal with multi row even though I don't like it but the scrolling tabs I don't like.

The webpanel in Vivaldi is an excellent feature. In fact the only reason I don't currently use Vivaldi is the lack of sync. I know it is available in the snapshots, but it is something I am not willing to be a guinea pig with. Also with Firefox I can run my own private sync server.

So I have been using Firefox off and on for over ten years, and stuck with it even during the height of the Chrome frenzy. Lately it has been nothing but improvement, stacked on top of improvement.

One of my favorite add-ons has become Firefox Multi Account Containers https://addons.mozilla.org/en-US/firefox/addon/multi-account-containers/
allowing me to help separate my online activities into different containers. The link provides an excellent overview, but one of the most practical items is that you can now login into multiple accounts in the same browser. Particularly useful when you have multiple email accounts with the same provider.

Also, its very name [Side View Firefox experiment ] implies a degree of ephemerality to it; FF Devs might remove it next week/month, just like the previous inbuilt function i’ve whinged about.

I perfectly understand your privacy concerns, and obviously won't make any suggestions regarding that, suffice to say I have never had any problems with the Test Pilot program, anecdotal but better than nothing. As to the ephemerality of it, well it mostly ties into the popularity of a feature. More people testing, more people commenting on it, the more likely it is that it gets adopted permanently. So not testing it is kind of a "shot myself in the foot" kind of moment.

The webpanel in Vivaldi is an excellent feature

available in the snapshots

Indeed, & i used Vivaldi Snapshot for 3 years [ironically though, i have no interest in Sync so never used it], til my recent decision to tryout the new FF [with which so far i remain v pleased].

stuck with it even during the height of the Chrome frenzy

The Australis phase was horrible. I used the wonderful Opera12 for some years til it became unsupported, thence a wide variety of FF- & Chromium-based options over the next several years, but i really detested the Australis design. So far, FF Quantum [+ several of its new Add-Ons] is really impressing me... though i still miss many of the brilliant Vivaldi features that i loved.

Yes, they are v good, aren't they? I discovered & adopted this AO a couple of weeks ago. Not perfect, but still a very handy feature. This AO plays nicely btw with the Panorama View AO, unlike the OneTab AO that i tried this morning [which i used very successfully for years in Chromium-based browsers]... ugh, i lost hours this morning fighting the mess that OT made with my tabs badly interacting with PV.

anecdotal but better than nothing

Good to know, thanks.

kind of a “shot myself in the foot” kind of moment

I quite agree with you, & have been having a fearsome quarrel within my skull over this. Otoh, so far [though not as good], the updated Open in Sidebar AO is working nicely for me.

Because i'm only newly returned to using FF, the following info is probably already widely known, but just in case there's others here as ignorant as me... I discovered this yesterday, in my Firefox-Developer-Edition 63.0b2.

Older FF versions [i think] could have visual tab previews by enabling the 'about:config' tweak:

In v63 though, this is only halfway there. One must ALSO enable "Ctrl+Tab cycles through tabs in recently used order" in Preferences - General - Tabs. If only [either] one singly is enabled, no previews appear, only scrolling through the tabs row occurs.

EDIT: Humph, it's not as good as it could be. It seems only to show a maximum of 6 tabs' previews, not previews for all [>6] currently open tabs. Bummer.

I would be much more likely to use firefox if they implemented this: https://bugzilla.mozilla.org/show_bug.cgi?id=1332447

Since it has been open for 2 years at this point that seems unlikely.

They did recently move it to the web extensions category - possibly signalling that it could be implemented that way at some point.

I shan't bother with a pic of that new Experiments tab, coz it's a long full page of them.

Just checked - not in regular.

Yes i checked both Std & Dev.Ed as soon as i noticed it in Nightly but so far it's not percolated down, ergo, clearly these changes did only arrive sometime during 80's existence.

Btw, via about:config today i enabled WebRender in those latter two, having had it already enabled since yonks ago in Nightly. I'd be lying if i were to claim i see a tangible subjective improvement, but whatevs...

I think Windows is an excellent platform for studying Dark Patterns. It starts with the installation and then explodes when you start using their software. It used to be the main thing that British people hated about American style marketing (like subliminal messages and infomercials on TV etc), but now everyone's jumping on the bandwagon...

Windows was the platform that led me to Opera, which was just amazing, and later on Firefox looked better (and Vivaldi took over where Opera sold out to China), so I'll just tolerate the annoying scrolling tab bar for now.

Ha. Looks like my "revelation" today truly was late-coming: 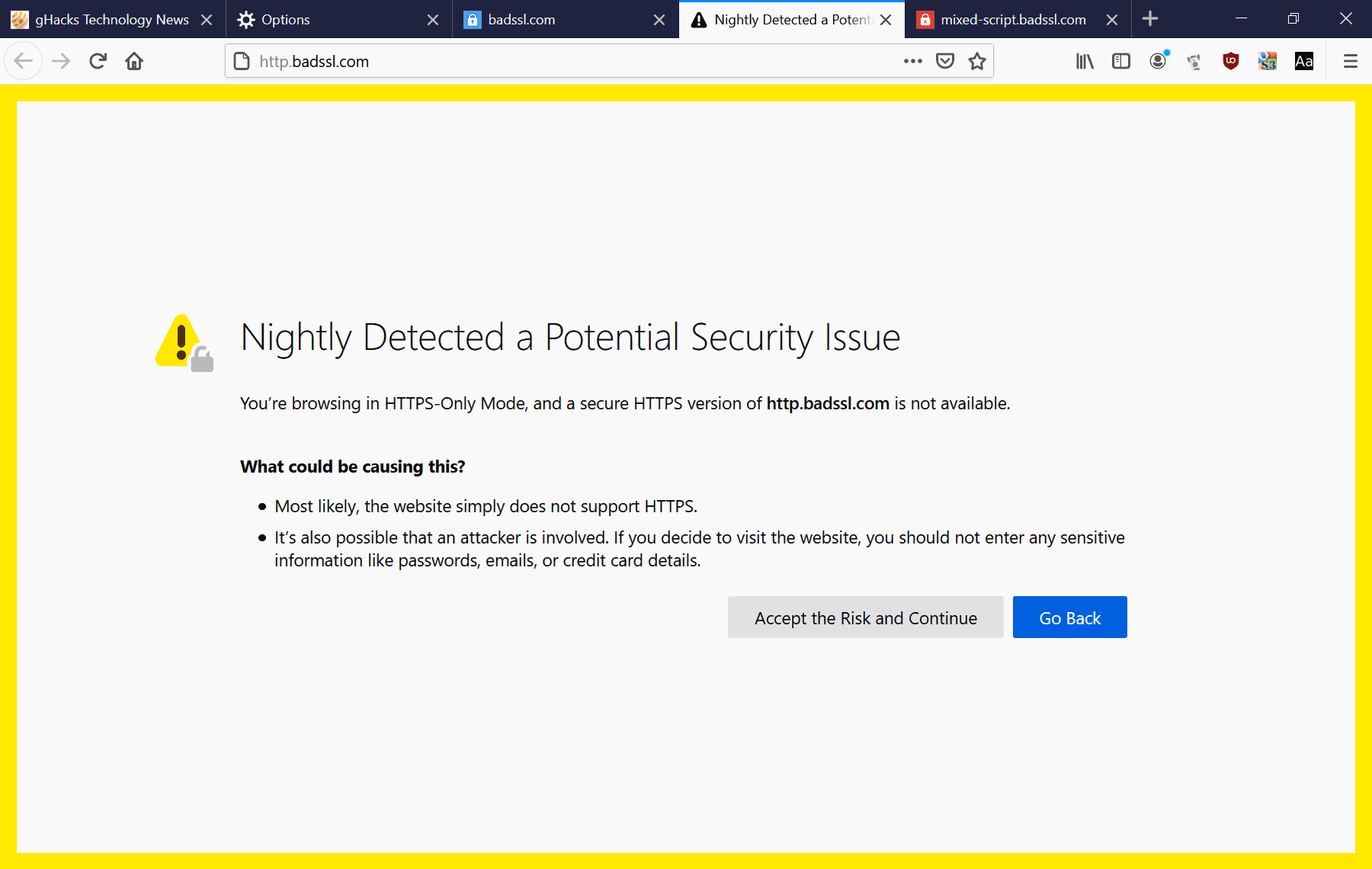 Mozilla added a new preference to Firefox 80 Nightly that provides users of the browser with options to enable the HTTPS-Only mode in the browser.

Fwiw i agree with Martin's conclusion. Though this function is only recent-arrived in Preferences, it's been available for a comparatively long time in about:config, where i had previously tested it, then abandoned it once i realised exactly what Martin pointed out. Mozilla Devs really do need to include HTTPS Everywhere AO site tunability here.