Including FreeOffice is a bad idea (Was: Manjaro Roadmap)

As far as I know, Manjaro has never been "sold" as a fully libre distribution. If you think that, you may be wrong about it. That's what is Arch for with it's KISS philosophy.

I am not fighting for myself as I can easily uninstall programs I don't want. But I believe in supporting and introducing better programs that are also FOSS if possible to newcomers to Linux.

And you dont understand, that you can't live for free, or just by the community, if you don't believe it, just see projects like, Firefox, Linux Mint, Ubuntu, Blender (Epic games donation drama), and so on. They need to live of something, and even the community criticize donations, something that happened with Blender.

I know money is the blood for everything. I donated to lots of projects like Firefox, LibreOffice, Framasoft (a french association for free software) and many more.

But putting a crippled software is the worst move you can make.

I am out of the loop a bit, how do we know about FreeOffice inclusion in Manjaro?
Was there some announcment that it will be included (if yes - could I get a link please), or did it just appear in the installation images, or what happened?

Hello community, I am happy to announce another Testing Update. Mostly we have XFCE, Kernels and Haskell updates with this one. Manjaro Hardware [image] With the new Premium BIOS, you have the opportunity to make various profiles for chipset-specific settings and components in order to be able to operate the device optimally depending on the application on Tuxedo hardware. Find out more here and stay tuned for the announcement of our new Manjaro Laptop we will launch together. Support of …

No, but sold as a "#FREE OPERATING SYSTEM FOR EVERYONE" as it is written on homepage.

Yes, but it doesn't mean that it will have just "free libre software" on it. As i said before, go with a Manjaro spin or directly to other distribution.

I am out of the loop a bit, how do we know about FreeOffice inclusion in Manjaro?
Was there some announcment that it will be included (if yes - could I get a link please), or did it just appear in the installation images, or what happened?

All of Manjaro is hosted on GitLab. We can see all the info there. And there were announcements.

Additionally we ship FreeOffice by default. This is possible since we partnered up with Softmaker . Enjoy the best compability to MS Office , we still provide as our JAK launchers.

I am all for partnerships and sponsorship that makes sense... but this partnership makes no sense to me at all.

The best compatibility with MSOffice ?

And I'm absolutely sorry : while being happy to install what I want, I really see NO REASONS to have to come back to the Windows age, where the first thing one HAS to to after an install is to uninstall the CRAPWARE they try to feed you with.

Again, there are numerous ways to monetize, I could even be interested in helping for that.

The best compatibility with MSOffice ?

Okay, that's just awful.
I believe that I can say on behalf of at least some of us, that we use FOSS to avoid vendor lock-in thing. To avoid situations where you have to pay for products like Windows 10, MS Office and all the others just because you got used to them (in the best case), or because you have a lot of software/documents/something else that requires these products. Obviously, we want the same for those to whom we recommend to install Manjaro (or any other Linux distro).
The result is that we can't be vendor locked in by FOSS software (whether it's Manjaro/LibreOffice/just anything else), because if something goes wrong - the fork is always possible. Imagine the situation that tomorrow LibreOffice becomes proprietary software. And... what? The same day someone forks the previous (open source) version and continues to develop it. Now imagine that tomorrow FreeOffice becomes not free (as in beer), and, for example, requires you to pay 20$ a month even to use "basic" features.
What can you do? Well, if enough time has passed to make you vendor locked-in, you will pay them. Awful.
Okay, those of us who understand that can simply remove FreeOffice from our installs and happily continue using Manjaro. What about about our relatives/friends for whom we recommend, or even install Manjaro on their computers? It's either new unnecessary work (removing this software) or getting them vendor locked-in

I don't know how I can continue suggesting Manjaro, and that sucks, really sucks.
And now, my rant has ended...

Okay, those of us who understand that can simply remove FreeOffice from our installs and happily continue using Manjaro. What about about our relatives/friends for whom we recommend, or even install Manjaro on their computers? It's either new unnecessary work (removing this software) or getting them vendor locked-in

Yeah... because now we are even promoting the USAGE of docx files because you can't save in .odt format with FreeOffice

because you can't save in .odt format with FreeOffice

no, you can save in docx format for free 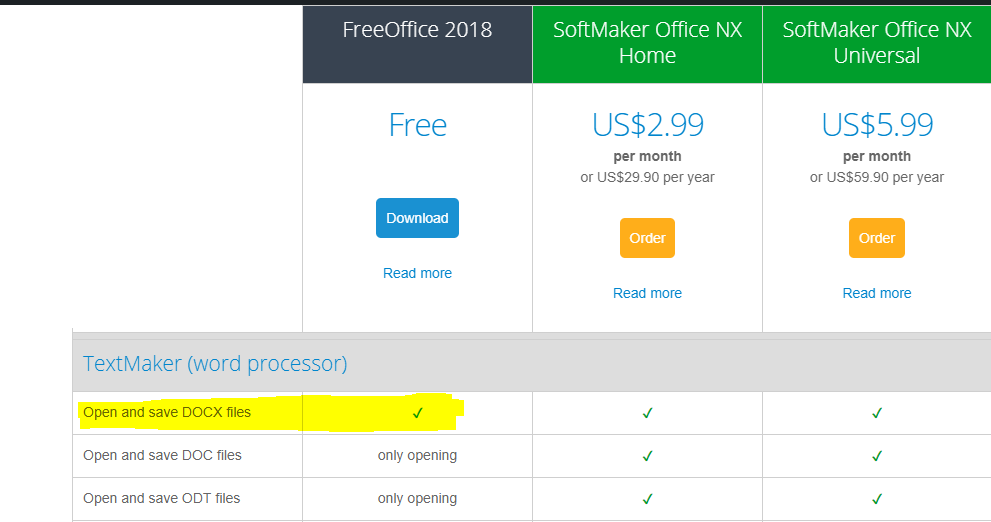 I'm going to skip a lot of stuff here and just agree that freeoffice by default is a poor choice...

(then again - I'm fine with no office suite too, but that certainly isnt happening to flagship ISOs ...)

[darn .. now I see from the announce that it is because 'we partnered with softmaker' ...]

.. I will continue to happily use Architect and not be bothered

I haven't yet tested freeoffice, but based on the chart it does not seem sufficient for the default office application. I prefer libreoffice. The skype and ms office launcher makes sense, because they are minuscule, add functionality and don't compete with the default software. Freeoffice... Seems like a big compromise.

Not all proprietary software is bad. Not all paid software is bad. I love that sublime text is free to test and will pay for it eventually when I have an opportunity. But freeoffice is not sublime.

Well, this is why we have community editions. Freeoffice comes only with the official editions afaik. And if you install with manjaro-architect, you can opt out of any package. I'm personally okay with this suboptimal tradeoff as long as options are available. I'm not installing the official editions anyway.

The tools for making isos are available, and anyone can make a community edition. For example, tromjaro could easily have been a community edition if it did not want to become a separate distro instead. If people want trade free or Libre version of Manjaro, you can do it. It's not very hard and there many people to help you.

I see manjaro first and foremost as a community distro. We are what makes manjaro what it is.

And if you install with manjaro-architect, you can opt out of any package.

Wait... you can? I know minimal doesn't have most packages, and I use that. But if I use full, where can you opt out of packages you don't want? Maybe I totally missed it because I never needed to use it. I know there is a section that prompts you asking if you want to install additional programs, but never noticed the opt out parts.

I will continue to happily use Architect and not be bothered

Yes, I also think the same. Go for what it works for you.

Sure you can - theres a whole section for choosing software.

[note to self - check out most recent Architect ISO again soon... its been a while]

No, but sold as a "#FREE OPERATING SYSTEM FOR EVERYONE" as it is written on homepage.

Yes, but it doesn't mean that it will have just "free libre software" on it. As i said before, go with a Manjaro spin or directly to other distribution.

My desktop : archlinux
My laptop : manjaro

I thought Manjaro was providing fully working office suite, not a crippled office one.

I was wrong for the last 4 years or so.

For me, it's a bit of a disconnect because I've been using Linux for so long (since 1998) that I have no need to care one whit about MS Office compatibility. At work, we pretty much use Google Docs for everything. Personally, my files were converted to Star Office, then Open Office, and now LibreOffice a long time ago.

Maybe a lot of us came to Manjaro from this perspective: we finally found a Linux distro that successfully combined the concepts of rolling and stable. We're the old timers; the people who've been here from the beginning.

But there are only so many of us to go around.

At some point, Manjaro needs to grow, to attract new users: refugees getting booted from Windows 7 and who don't want to install Windows 10, or maybe people who just want to switch to get better performance out of their machines. To attract these users, you have to respond to their needs. Unfortunately, MS Office compatibility seems to be one of those needs the Manjaro team has identified that they're trying to respond to, first with the MS Office online thing (which I uninstall), and now with FreeOffice.

I don't see a problem with this. If it makes it easier for Grandma to use the OS, isn't that better than having her continue on Windows? Migration is hard. You don't just do it in one step. It can take years to do fully and successfully. So maybe it's better to look at the FreeOffice thing as an aid to migration. It's a tool you can use or not use. Because most people aren't starting from scratch with their computers, they have to migrate.

For people starting from scratch with a new machine, yeah, this doesn't seem like a great decision. I like the suggestion of a dialog during the install where you pick your office suite. That might be a way to serve everybody, not just new users migrating from Windows. But ultimately, those of us who migrated long ago know how to fix our systems, so even if they don't add that, it shouldn't be a huge hurdle to get over.