This is an effort to construct a proper Latte Dock Documentation page. Its starting point is the old Github wiki, in direction to re-construct in a proper/better way to be a useful guide for "Latte Ecosystem" users. Contributing is in a volunteer base.

A docbook export is available for checking out.
~~A link to the file ~~
As I realized, it may not be needed to mess with DocBook, so a proper construction is more than enough.

Hint: You can add them also outside the taskmanager but that creates animation issues for size <64px and it is memory hungry.

I explicitly deliberately do not use LD as a TM, but only as a launcher dock.

Does that mean that my current LD... 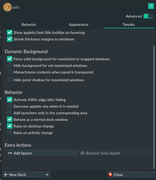 Actually, this is not my work, rather a simple reformatting of Latte wiki (copy/paste).
Any corrections are appreciated. Please quote exactly the errors and provide your corrected/better expressed version.
I can't do much about your issues with Latte here. If you start a topic, I can do some checks with my setup and try to provide helpful info.

[i am trying to be helpful not mean!

I would never thought of that

and hover afterwards the specific applet

and then hover over the specific applet

what are it’s dependencies?

what are its dependencies? [don't worry, hyper uber mega tonnes of natively english-speaking denizens, raised from birth with english as their sole or primary language, have no comprehension at all about correct apostrophe usage. In this specific case, the apostrophe denotes contraction of the separate words it is, whereas the possessive pronoun case required here is simply its. My personal tip to remember this, ta heaps to my long-ago Year 5 primary school teacher, is to always say it (in my head) to myself in its expanded form, to evaluate then if it makes sense in that application (eg, the apostrophe would be correct for it's over there on the table)].

Each of those have a number

Each of those has a number [Each is singular & effectively has an invisible/unspoken one after it (eg each (one) of the litter **is** a tabby), hence necessitates a matching singular verb].

a number to distiguish one from

a number to distinguish one from

each Containment has it’s applets

tweak every applet seperately, you can change the appereance

tweak every applet separately, you can change the appearance

to see for your self

to see for yourself

A: None is forbiden

place them in an safe place

you need to go at plasma systemsettings

you need to go to plasma systemsettings

A2: alternativily you can run commands

Can I tweak a launcher’s ico or it’s command parameteres?

Can I tweak a launcher’s icon or its command parameters?

set it up at you plasma environment

launcher - and before it’s semicolon

relevant window is shown even though they shouldnt

when clicking on an launcher it’s icon is momentarily disappeared

when clicking on a launcher its icon momentarily disappears

version if you like. [However this whole item is pointless, due to version obsolescence].

maximum size that they shouldnt overcome

Behavior sadly is correct for north merkins, but wrong for UK, NZ, Oz [at least]... Behaviour.

details, you may want to look here and here

I intuit that both instances of here are supposed to have links, but they're missing.

in wayland is the distrors

Wayland is the distros [& of course i'm (sic) taking a liberty here, given distro/s is only geek-speak not common language].

features currently not in master branch

Intel Graphics and experiment problems with

Intel Graphics and experience problems with [i assume that was the intended meaning...?].

If you have your dock on the same border at which a touch gesture is activated**,** the dock may not

Blooody [sic] hell, in future i (sic) shall bite my tongue - this took absobloodylutely ages [or, in SI units, mega-yonks]. Hoist with my own petard.

Ahah! So I always write this correctly and FF always corrects me wrongly!

Hmmm, I'm trying out Latte Dock with the KDE version of Manjaro, and I've noticed that none of the favorite applications that I've defined in KDE are appearing in the dock. am I missing a widget that is supposed to be there or something?

none of the favorite applications that I've defined in KDE

The dock is filled "manually" (pinned) AFAIK. Does this work differently on standard Plasma launcher widget?

Latte is a separate app so system favorites or apps pinned to the system panel aren't automatically added to latte. You just use latte INSTEAD of system panel/dock and you have to configure it to your needs.

Thank you, I see now.

If you have a problem with Latte-Dock cpu demand, this advice from the Dev might help you:

My Latte-Dock is not at all hungry for cpu, but if yours is, this advice from the Dev might help you: https://www.reddit.com/r/kde/comments/fnnskg/latte_dock_howto_reduce_cpu_usage/ Latte Dock - HowTo reduce CPU usage There are many users asking how to reduce the cpu usage for Latte because it is too costly for a dock solution. Latte in general has as a focus to provide maximum configurability and performance, so all its graphics and animations as set to BEST values... An easy and known solu…