The latest versions of Xorg, kernel, and NVIDIA driver all support PRIME output but setting this up is a bit of a faff. What follows is a method to get this working on an Optimus-enabled laptop. 440xx update: If you have something which supports driver series 440xx then you should switch to video-hybrid-intel-nvidia-440xx-prime and ignore this guide (unless you want to use only the dGPU). Specify using the dGPU with e.g. prime-run glxinfo. Note: Fermi-based GPUs should use nvidia-390xx inste…

But, "Prime Profiles" is not showing Nvidia Setting. 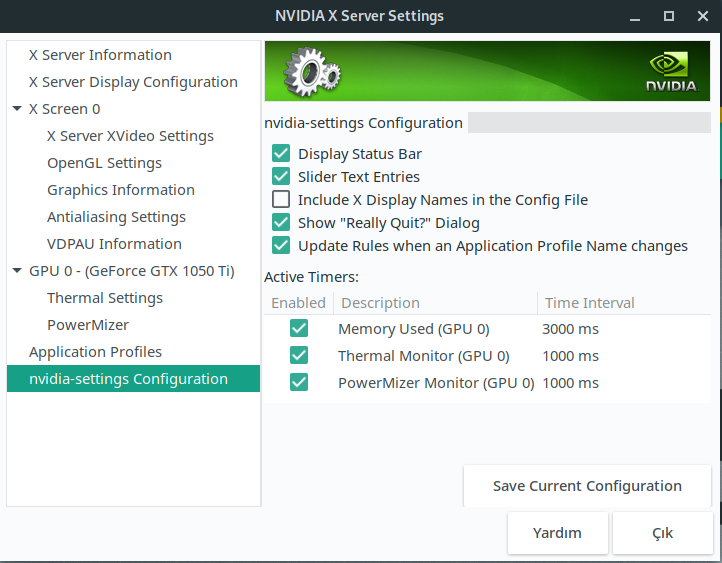 When I run nvidia-smi on terminal, this codes outputs. But I don't switch Intel and Nvidia Graphic Cards.

Please don't make the confusion between Bumblebee - that gives the possibility to switch between iGPU and dGPU, and Prime - that uses only the dGPU.

Also, considering that i know that video, i hope you did not make the same mistake as the one who did it, to install LightDM and GDM in KDE Plasma that has SDDM by default. The level of confusion of that guy is beyond any common sense.

Are you referring to this profiles? 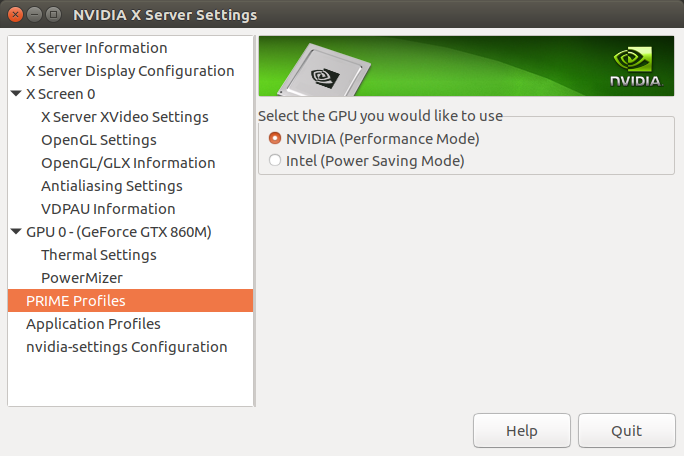 You didn't read the tutorial carefully

and now there is the confusion with the Ubuntu nvidia-prime that i think is something else...

Maybe is better to look at this

optimus-manager This Linux program provides a solution for GPU switching on Optimus laptops (a.k.a laptops with dual Nvidia/Intel GPUs). Manjaro is supported: Only Xorg sessions are supported (no Wayland). Supported display managers are : SDDM, LightDM, GDM. The program may still work with others but you have to configure them manually (see this section). Regression: GDM support is currently broken (see this issue : https://github.com/Askannz/optimus-manager/issues/4). You can still use optim…


or try this one

an alternative to bumblebee or optimus-manager for those of us who have optimus enabled laptops. my initial goal was to just write a small bash script that would let me easily jump back and forth from using PRIME that i have set up thanks to @jonathon 's tutorial, and also an intel only setup that completely powers down the nvidia GPU in a way that does not cause lockups, break sleep/suspend cycles, and allows for the very best performance when i want it and the very best battery life whe…

Note: do not mix the installations and approaches as the one in the video, chose just one suited for your installed DE

if you try optimus-manager and it doesnt work properly, pay close attention to every step you did to set it up because you'll have to undo it in reverse and also run the --cleanup before trying to uninstall it, otherwise every configuration you try after it wont work.

Also, considering that i know that video, i hope you did not make the same mistake as the one who did it, to install LightDM and GDM in KDE Plasma that has SDDM by default. The level of confusion of that guy is beyond any common sense.

i remember this one too, that user spread links to that video all over the forum

i thought they all got removed, apparently not so.

@eprianu if you want switchable graphics, i would suggest optimus-switch and so you know, i am bias towards it because i made it but thats not why i suggest it.

optimus-manager uses either bbswitch or nouveau to handle disabling the nvidia gpu and requires bbswitch along with nouveau drivers to be installed along with the nvidia drivers. bbswitch is a pain in the arse and is known for being problematic, even more so on gtx 1050 according to arch wiki. and nouveau? no thanks.

optimus-switch uses an acpi call specific to your GPU to fully power down/disable the gpu in a way that doesnt cause lockups after suspend for example. also needs only video-nvidia package, no nouveau, no bbswitch. this allows you to switch between nvidia(prime) mode just like the tutorial you were trying to follow, and intel-only mode which disables/powers down the nvidia gpu. the instructions are easy to follow. for you on KDE you would use the sddm version. 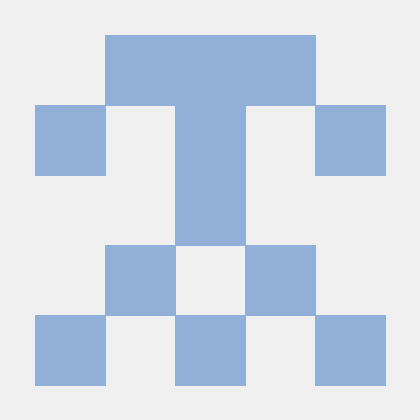 if you did follow that video, undo everything you did, get rid of GDM,LightDM