I am happy to announce another Stable Update right right from the #snapcraftsummit in Montreal! 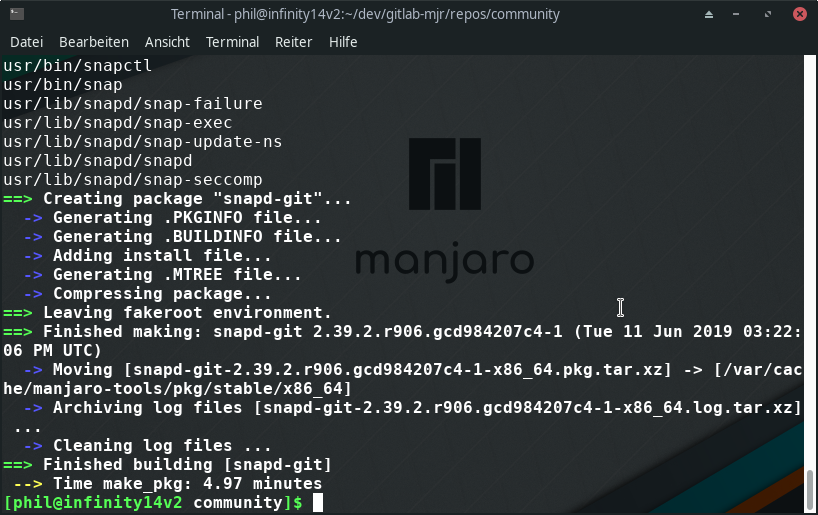 With this we also released Manjaro 18.1.0-rc1. Get the latest ISOs from OSDN: XFCE, KDE, Gnome
Give us the usual feedback and let us know what you think about this update.

A detailed list of all package changes may be found here

You won't see explicitly 4.14-pre1 anywhere on our xfce-gtk3 packages. We follow the versioning used by upstream. Here's the list of all components that are part of XFCE 4.14-pre1.

If you are using the Matcha theme in kvantum you may experience a theme reset. Simply install kvantum-theme-matcha if not happend yet and select the new provided variants. Manjaro 18.1 releases will ship with the new themes by default.

Currently several users report different issues for Octopi. So if you encounter some of them, you may switch to pamac for now: sudo pacman -Syu pamac

(Note that sudo pacman -Syu pamac will both install Pamac and upgrade all upgradable packages on your system at the same time.)

All good for me: linux51+cinnamon+Intel UHD Graphics 620

All good for me too !
Was 439MB of download after new signature was imported.
Now My Telegram, Krita and much more are up to date.
Thanks a lot !

Just mind when will WPS get updated, but this is not yours i guess.

Just to make sure, I added the info on the wiki post.

Vapoursynth don't work correctly after the update.
For example:

Gnome here and everything went smoothly and I always upgrade to the latest kernel anyway and only go back if there is a problem to the latest Recommended LTS. It's an incredible OS Thanks to the Mighty Manjaro Team.

Linux 5.0 is the only one that where my touchpad works without issue. I hope the new 5.1 has patched the occassional freeze issue.

Perfect update via tty , KDE with 4.19 and Nvidia running great as usual , thank's y'all .

Great update, no problems! Thanks!

Update mostly fine except one of my often use wine game (windows based Wolfenstein-The Old Blood)) has lost sound (not in cut scenes !!!) and stutter very badly. The other wine games seems ok. Steam games works ok too. I restore an disk image from earlier and start installing section of the update. Is it not the new wine (from 4.8 to 4.9). I install the new kernels with the new Nvidia driver. Some wine games won't start at all, so I install everything. I think we have to do that anyway as it is hard to pick what each updates need. That's the only defect so far.

Nvidia drivers got a lot better in last few months. It seems good at first, but playing 60fps videos still have tearing. So I continue to use FFCP.

No issues to report on five Manjaro KDE machines. And as always, great job team Manjaro. Greetings to Montreal.

No issues with the update! Smooth as usual.

All well here, thank you!