Alright, let's get to it:

Still slow, going to start work now and I'll keep an eye on it, just gonna let it sit for a while.

Timed the decryption this time; it took around 7 minutes.

Some extra output I thought my be useful:

My thinking, if I read some of the things in this post on LUKS encryption on Slackware.. perhaps some extra insmod somemod? Since my Manjaro install's grub menu doesn't have any problems, should we check which mods are available in there, compared to the one of the Live Boot USB?

I'll just wait for a reply for a bit before continuing.

Okay! Thanks!
I think I've got why we failed test d.

Any idea why decrypting sda2 took 'forever' the first time, very long the second time and 7 minutes the 3rd try? They are all at the same stage. I would think your 'usual' boot won't take a few seconds.
It is troubling, still and if you or anyone have an idea, however unproven, it will still be useful.

Ah, still busy.
But I think that's because your grub.cfg has uuid of sda2 and since it is decrypted to its decrypted uuid, and uncrypted sda2 uuid is not available.

I will look at it when back at desktop.
Meantime appreciate any input.

Right, a quick summary.
o Test C which uses (configfile) the OS grub.cfg worked.
o Test D (direct boot) failed because it is unable to access sda2 uuid, though it is written by the OS into its grub.cfg and /etc/default/grub. Not being able to access it is also part of the decision to try to boot the OS without it.

o Test D can work (I think) if we are to manually input the uuid of the partition (sda2) which requires prior knowledge of that uuid and makes the method tedious and impractical.
o The long times to decrypt the partition is still troubling and unresolved.

So now we make one attempt to see if we can boot up without the need of raw uuid of sda2.
Reminder that test c uses configfile which contains sda2 uuid and test d failed to access sda2 uuid and therefore failed to boot. So it is a modification of test d and won't rely on accessing sda2 uuid.

Thanks for testing @infallible_haibt and pinging @AgentS

ps: no further tests are planned.
ps: @infallible_haibt, can you print out from your terminal (after booting up OS)

I am trying to look for any variable there that makes the decrypting faster.
maybe a "cryptodisk=y" or "cryptodisk=1" and without it in our commands make it slower.
Adding it (if it is there) will make it faster (I think).

I've been out of the air for a bit, sorry for that. Got distracted by day-to-day life. Let's get on with it though, I don't believe we were finished!

Close but no cigar?

Noted you did not mention any long times to decrypt sda2. If it has improved, it might be time for a small celebration.

So it looks like Test E proved that it is still necessary to input the uuid of sda2.

So this line in Test D

is required. While $pqr can be determined, $abc needs to be manually input.
And the line to determine $abc must be removed.

We can determine $abc with a cat command in grub after setting decrypted sda2 as root.

@infallible_haibt, while I do not have any encryption, you can check if the uuid of sda2 can be found in /etc/crypttab. You should have 2 entries, one for sda2 and the other for swap.

I had hoped that uuid for sda2 ($abc) can be 'mined' like we have done for decrypted sda2 ($pqr) but unfortunately, while 'cat', 'ls' is available in grub, 'grep', 'more' or 'less' is not available. Perhaps my 'regexp' (regular expression) foo is not sufficient.

A practical procedure to ensure we have a bootable encrypted system if the bootloader goes kaput is to therefore to have a backup grub rescue cd with the working grub.cfg burned into it.

Thanks @infallible_haibt for helping to test this out and everyone here for the contribution.

Noted you did not mention any long times to decrypt sda2. If it has improved, it might be time for a small celebration.

It was a bit over a minute, which is slower than the 'regular' boot. But much improved over the earlier ~7 mins, somehow.

We can determine $abc with a cat command in grub after setting decrypted sda2 as root.

Yep, this works. As you said, there are two entries.

If I run Test D and swap out:

It will continue into the same result as from Test E.

Is there anything you still need me to test? I understand correctly that there is nothing to do to resolve my error when doing a 'regular boot' w/o live usb and without going through UEFI, falling back into grub rescue?

EDIT: Just checked the decryption-time from the uSD, it's about 15sec.

It will continue into the same result as from Test E .

There is really no need for us to continue, but if you want to test TEST F where you will need to manually input 3 times uuid of sda2 at the linux line, give a shout.

. I suggest you try out the grub rescue cd and see if that boots. I think you may want to keep it as insurance. And if you change the kernel and haven't made a new rescue cd, you can manually (press 'e') just change the kernel and that should also boot. I can work with you if you have any questions on it. As said, I think that is more practical.

ps: I am still going through what 'regexp' (insmod regexp) can do if it can mine out sda2 uuid. i know about regexp in grub but so far all these while, I see no need to use it (probe -u is easier, for example). It was fun using it (detecting drives and partitions) but there are other practical and easier alternatives.

[EDIT] - 15 secs? That's good! I was wondering about the long decrypt times. Shouldn't happen unless we (meaning I) mess up some grub commands. Great to hear.

I actually understood what test F should look like, so I already did it anyway. It was what I was reporting about. I don't quite understand why you say I should manually type it out three times, though. I just manually set abc=(UUID) instead of using the probe -u --set=abc-construct.
My point was that although it kind of starts to boot, it doesn't actually properly boot into Manjaro. Just like Test E.

Anyway, thanks for the help! Glad to have been of use testing.

And as for the decryption times, the 15 sec is fine for me. And that's even from a microSD card (so over USB). I imagine it should do even better if I were to install Manjaro on the NVMe SSD, which is obviously a faster drive.

no apostrophes, and no parenthesis.
But you have to make sure you typed correctly.

And that's even from a microSD card

Oh...microSD card? There might be some problem using microSD card to boot. Some technical things about something. Some will work if inserted before starting with it inserted. Some have reported it won't either. But usb ports are fine. Some say using usb ports for microSD is still not fine. I don't know for sure now. Just a caution.

no apostrophes, and no parenthesis.
But you have to make sure you typed correctly.

Oh...microSD card? There might be some problem using microSD card to boot.

Hehe, thought this was already clear. I guess there's just too many uncertainties in my current setup.

Okay, noted. But I just used the same as in your original booting (I hope

) grub.cfg.
Note I cannot recheck (I don't have encryption) but if you find any error or typo later on, or a rechecking done but still an error, let us know.

But good luck. You're literally on your own here.

I'm lucky I have @AgentS who checks many of the errors I make.

who checks many of the errors I make

On this one I cannot follow on. I am glad you can also troubleshoot things you don't really use..

My main question on this issue is "why don't you use provided tools (Calamares, M-A) and contribute to their bugs" ??

The only thing I missed out from your grub.cfg linux line is resume=xxxx parameter.
Maybe that' is important in encrypted systems?
Normally for unencrypted systems, I do away with this resume line (for testing, just bothersome and lazy) {and intel-ucode} and that will work. But if you want to test that out, you will also need to decrypt it (swap) put in the correct uuid for it (similarly obtained from cat /etc/crypttab) and entered manually.

As said, I thought that shouldn't matter but maybe it needs it for encrypted systems. That's the only thing I left out. Thought I should leave out another variable that can cause havoc if done wrong.

. I am glad you can also troubleshoot things you don't really use..

Learning from you, you have taught well.

Another problem solved: I no longer boot into grub rescue.
Turns out I had to rearrange boot order where internal storage should be the first entry.
The boot order now looks like this:

Seems like everything is working as it should. Just have a nasty-looking red bar on booting up: 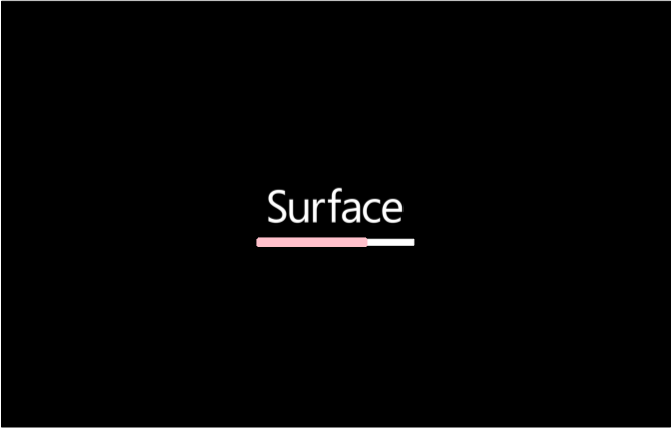 Actually… you just swapped 0005 and 0004, comparing with your previous report. 0000 is not booting anything (I suppose), so the next is the WinBoot, which is hijacked by Manjaro.