Testers needed for the Plasma5 20.0 release

#Lysia release is really close now. So we managed to spin the latest RC for our Plasma5 (KDE) edition. @oberon did a great job to tweak the most out of it. 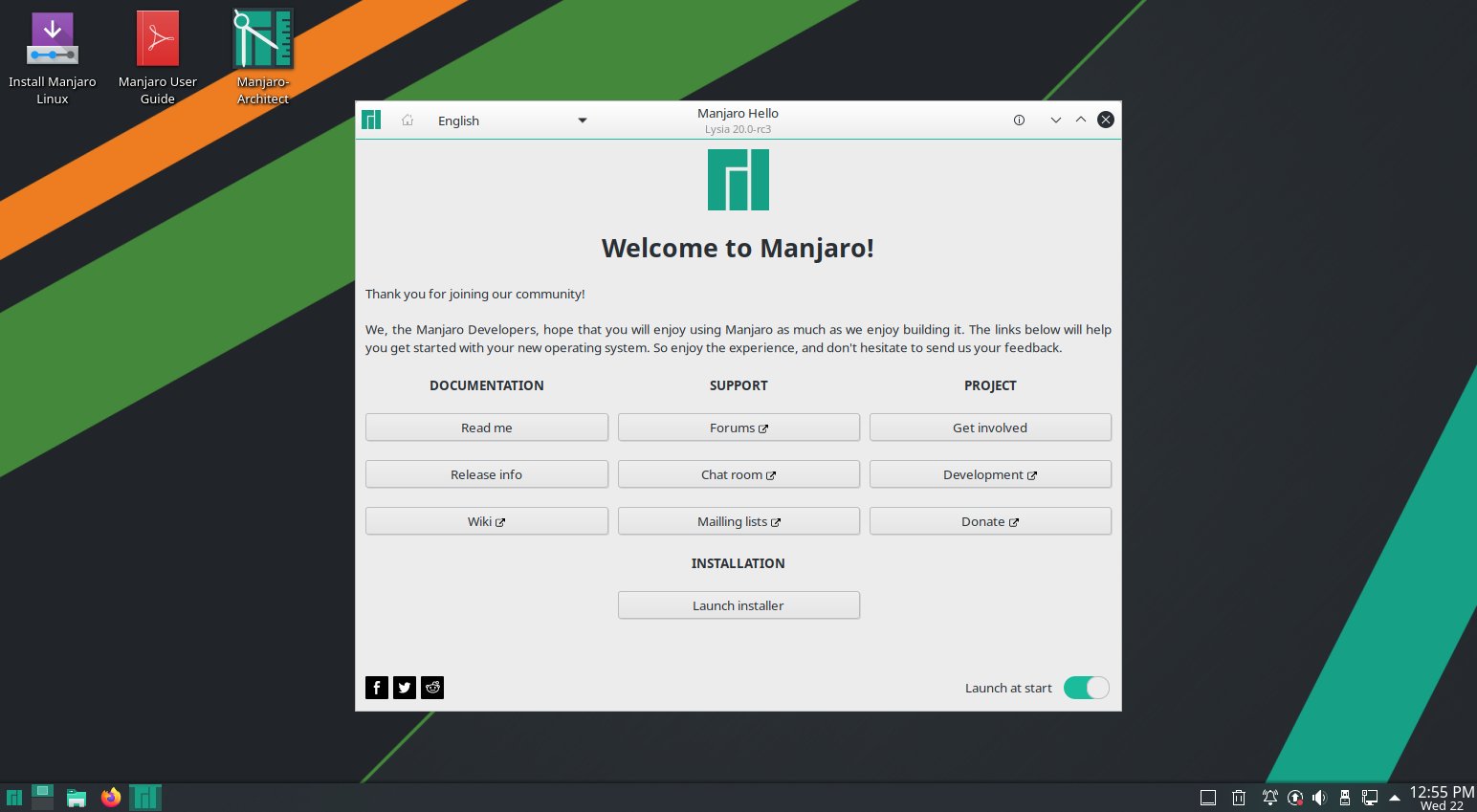 Our KDE edition provides the powerful, mature and feature-rich Plasma 5.18 desktop environment with a unique look-and-feel, which we completely re-designed in 2020.

We have rounded off text editor Kate with some additional color schemes and offer Plasma-Simplemenu as an alternative to the traditional Kickoff-Launcher.

With a wide selection of latest KDE-Apps 20.04 and other applications Manjaro-KDE aims to be a versatile and elegant environment ready for all your everyday needs.

Tell us what you think and give us constructive feedback. We expect to release this weekend if no regressions are found by then.

@philm are those of us that received the last 2 sets of testing updates going to automatically get the updates from this RC build? If not no biggy. Thanks

I am afraid of the "unstable" because I am a novice, but excellent news!
In itself it is a great satisfaction to be able to configure everything in our own way and thus be more productive. If someone uploads screenshoots of the changes, I will be grateful.

There's just the default profile. The animated splash-screen is awesome.

Edit: I could not remove the pager while the panel was docked on the left screen edge, had to move the panel to the default position to do that.

Very good work, this .iso has some really good defaults and polished to shine!

No ! we build package for aur and pamac not use compression by default : is much faster

Oh, i always build myself with makepkg -s to review changes manually and all that...
As i don't really trust AUR that much and like to prep my packages for doomsday.

I thought it's exactly same for pamac, but if it's conflicting then it's fine..

This morning, I installed a kde-based system using architect using test repositories to test the RC branch. At the moment, everything is fine, if there are problems, I will let you know, thanks.

I have no idea why the kde profile has this file. It has been there for years and none of the others has it. I will just remove it.

Clean install to VirtualBox. I can try on real HW, if a new ISO is not imminent.

Absolutely nothing to report.
Everything works after multiple attempts at perfection.
Really great work.

VM was fine, but on real HW, I could not get the ISO to boot to a graphical environment.

Listen uses inotify by default on Linux to monitor directories for changes. It's not uncommon to encounter a system limit on the number of files you can monitor. For example, Ubuntu Lucid's (64bit) inotify limit is set to 8192.

Is it safe to raise that value and what would be the consequences of a too high value?

Yes, it's safe to raise that value and below are the possible costs [source]:

To see current value do

But we probably want it highish. I see recommends at ex: 524288
From my limited research I might be comfortable with either 1/2 (262114) or 1/4 (131072) as well.
Based on some bug reports - 128k seems to be ceiling .. or floor.. for some. Though I guess it all depends on amount of stored data. If the above is to believed though, maybe setting a maximum of 128/256mb for kernel to monitor files is enough until proven otherwise.

(and yes though - whatever decided, this shouldnt be a DE-specific consideration.)

This lot of course was on the 19.0 ISO, so nothing has changed in that regard. It did exactly the same thing in Live environment but once installed, all Breath2 Konsole themes are available. EDIT - you can actually try them in live environment too. right click in the konsole terminal window and edit the profile.

@oberon & @bogdancovaciu I am not overly impressed with the latest iteration of the Breath2 Konsole themes. Feel free to carry on butchering them as I said all along you can do what you like with them but it would have been nice to have been involved in the discussions if there were any about such changes.

I'll keep my own going forward stored in my local folder for use with whichever distribution I see fit. I know there were compromises with it but on balance the new version has introduced far worse issues instead. You can deal with the mess yourselves because I won't be contributing anything further since you failed to ask for my input over the changes to my work.

If someone uploads screenshoots of the changes, I will be grateful.

just run it in live ISO or VM and see for yourself.

I found this, too, and tried to reproduce thre problem.
For me auto-updateb in dolphin works fine also without the file...

I am sorry for the bad procedure. My fault, I should have contacted you first.
Yesterday someone in the team noticed that alsamixer was completely unusable with breath2 terminal colours and @bogdancovaciu kindly offered to take a look at the schemes. He didn't even know it was your contribution - my fault again that I didn't communicate that.
In any case apparently he found a few more issues with the way the colours where defined and uploaded his fix to the repo which I just quickly checked and packaged. To me the result looked great and more or less like before in general...
Sorry again for the bad miscommunication!
I'd hope that there could still be an exchange between the two of you about the problems of thre color-scheme and what was - or apparently still is - broken...
Thank you

I am testing the 20.0 release in a vm, so i don't know how this is of relevance?

but once installed, all Breath2 Konsole themes are available

Did you test RC2 or RC3? The first shipped with a broken kernel ...