I am happy to announce another Testing Update. 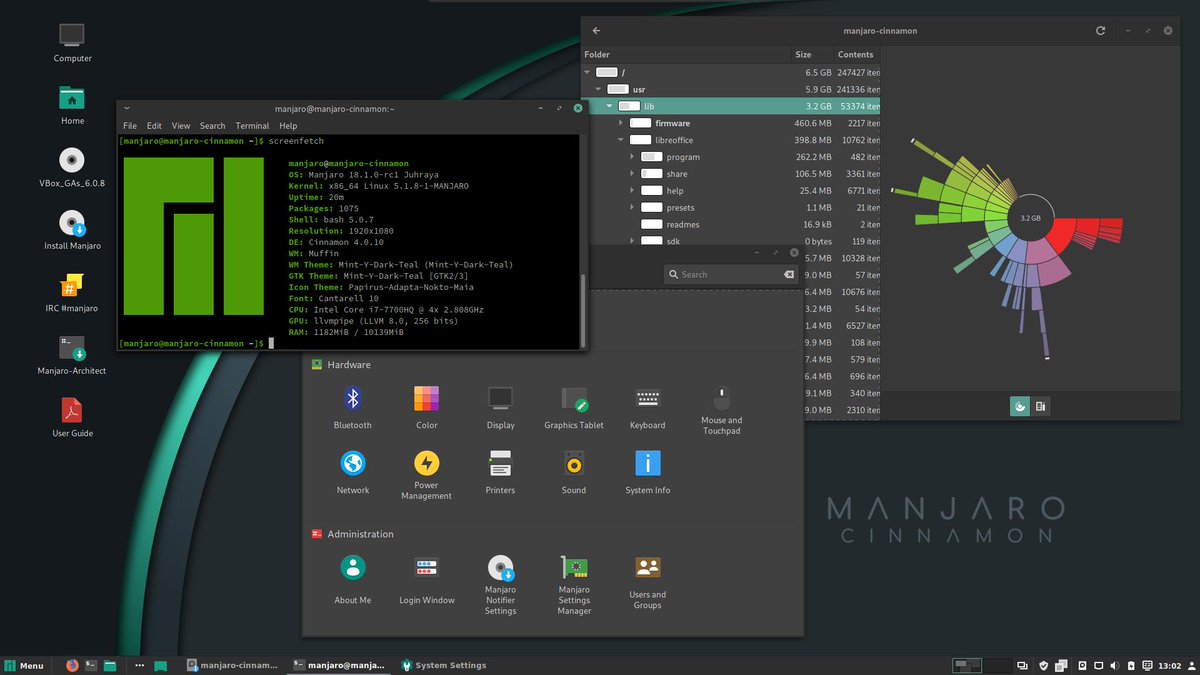 This is a wiki post; please edit as necessary.
Please, consider subscribing to the Testing Updates Announcements RSS feed

If you are using the Matcha theme in kvantum you may experience a theme reset. Simply install kvantum-theme-matcha if not happend yet and select the new provided variants. Manjaro 18.1 releases will ship with the new themes by default.

Currently several users report different issues for Octopi. So if you encounter some of them, you may switch to pamac for now: sudo pacman -Sy pamac

I think safe to ignore. Only comments changed.

I have Tried to replace the Lightdm config file on my Test System and after Reboot lightdm was dead.

I reported these items in unstable here and here.

@pheiduck, definitely don't replace the original config as the greeter-session would be reset to an example value. For me on xfce, it's set to "lightdm-gtk-greeter". Always examine .pacnew files before merging files, especially a possible future grub file on a LUKS system.

You cannot overwrite the file like this. Unless you have backups, you have lost your working settings. You have to merge changes manually, if you are going to do anything at all.

Maybe you can fix by uncomment the following lines in /etc/lightdm/lightdm.conf

Specify desktop for user-session. For me it is xfce. Like so:
user-session=xfce

There may be another setting that needs to be uncommented however. This is all I can remember from when I did the merge a few minutes ago.

It seems none of my Flatpak apps are working after the update, none is launching...... same on a second machine. Trying an older kernel does not help. Reinstalling Flatpak neither. Can anyone confirm this ?

There may be another setting that needs to be uncommented however.

I checked my 2 files and the only other thing on my end is an auto-login setting on line 120. @pheiduck, If you had auto-login enabled, you'd also uncomment this and add your session username. Example:

Yet another flawless update for me:
Upgrade via tty and yay, Kernel 5.2.x, KDE, btrfs, luks, nVidia, Virtualbox

Never do that. You lost all your configured settings. There are tools to migration.

Did you rebooted your system? Also check the logs on what might got installed on your system. We worked on some core packages to get improved snap support. However flatpak should not be broken by this. We will see.

does those new iso boot??
i am getting errors here after using buildiso
to create iso.
im getting many services failed to start while booting iso in vbox.
previously it was not a problem.
will try on unstable branch.
but i do think its systemd problem.

Hi Philm, yes, I have rebooted.... I have 4 flatpak apps, just (re)installing the AUR versions for now. I can't see anything strange in the log. (Maybe I am not looking at the right log ;-))

I can confirm that flatpaks stopped working.
I get this error message:

If you aren't already doing so try the iso profiles as your base to work from with your custom ISO from gitlab.manjaro.org and not the ones in the manjaro repository

well problem is with the update in the testing branch.
and i use the same profile to create iso.
two days ago i built iso using same profile on testing branch and it was working.
but today the iso is not booting.
and only culprit seems to me is systemd.

I might try it myself later, I have a custom KDE ISO too for personal usage but last built it with 17.1 gitlab iso-tools and profiles. It's still viable as an install source surprisingly and will update without issues (apart from the obvious time it takes)

It seems none of my Flatpak apps are working after the update, none is launching...... same on a second machine. Trying an older kernel does not help. Reinstalling Flatpak neither. Can anyone confirm this ?

I can confirm that flatpaks stopped working.
I get this error message:

Confirmed, we had similar reports on Unstable too.

I'm getting a weird issue since today when I try to run the Atom Flatpak. Tested on Kernel 4.19 and 5.2 ~ >>> flatpak run io.atom.Atom bwrap: No permissions to creating new namespace, likely because the kernel does not allow non-privileged user namespaces. On e.g. debian this can be enabled with 'sysctl kernel.unprivileged_userns_clone=1'. Can anyone else confirm this? This happens with all flatpaks for me, so it looks like there is something b…

The message given by Flatpak pretty much says the problem: you need to set this kernel parameter to 1 (meaning yes, true, etc.). (It says "On Debian,...", but it is not specific to Debian only.)

As for why you now need to explicitly do that now when you didn't have to bother messing with kernel parameters by yourself before, good question.

It is possible to configure the kernel at compile time so this kernel parameter is set at 1/yes/true/etc. by default for everyone.

Which kernel has this issue? Additionally added apparmor patches got added only to 5.1 kernel series. systemd I just updated today with updates to dbus. Currently only manjaro-tools-git work. I'll try to rebuild an ISO later this week.

Sorry for the hassle and delay of our next stable update.

Permission issues might be due to apparmor. We will update the profiles for that purpose. Already working closely with #canonical on the matter.

Which kernel has this issue?