Thunderbird to something else conversion?

With the advent of Thunderbird v 60, it seems a number of usability functions have vanished with few easy, logical replacements such as:

I have tried kdocker and alltray (neither work satisfactorily for me).

I am now attempting to see if I can find a replacement email client that is viable for my mass of email (7+GB). Evolution might be an option; I'm testing it to see.

The purpose of this thread is to tap into the knowledge base here to see how others are dealing with this, if at all. Have you converted a large email repository, if so, to what? What have you learned? Tips? Pointers, etc....

You know it's sad, when people say an application lost features, when those features where actually addons.
Thunderbird didn't loose features (as far as I know). The addons that provided those features have not been updated to support the new framework that Thunderbird uses.

I strive to use as few addons as possible for my applications, just so I'm not relying on them being there forever.

Actually I said the Thunderbird application lost usability functions (add-ons are usability functions contributed by the community). I do not think Thunderbird lost core application functions; it is simply less useful now than it was last week (when I ran v 52.9). I agree we should not use add-ons but then Thunderbird without those additional functions was never fully functional. It just seemed better than the alternatives. It may still be better than the alternatives... or maybe not...

For evolution, considering that gnome is pushing to remove the system tray I doubt the old plugins still work.

It's basically Thunderbird build against Unified XUL Platform ( continuation of the old Mozilla platform ).
However, Hyperbola package likely won't run on Manjaro ( you can try though ), so manual compilation is the only option atm.
I tried, and while it works just fine, add-ons do have some issues. Firstly, Icedove-UXP has different GUID ( identification ), so that needs fixing for all addons ( easily done though ).
However, namely Gnotifier doesn't init at all (couldn't find out why), and Firetray had issues detecting that it's running under Thunderbird ( easily fixed ).
I'd wait for UXP te get a stable release, then try again and see "what's up"...

In the meantime, the only client coming close to TB is Claws-Mail:

Has both, minus the messages count Firetray has.

Has that too, except that the content is not shown for notifications for multiple messages (AFAIK). You just get the typical "XY number of new messages arrived for XYZ account".

And if you care about RSS as I do, Claws does almost as good job as TB. 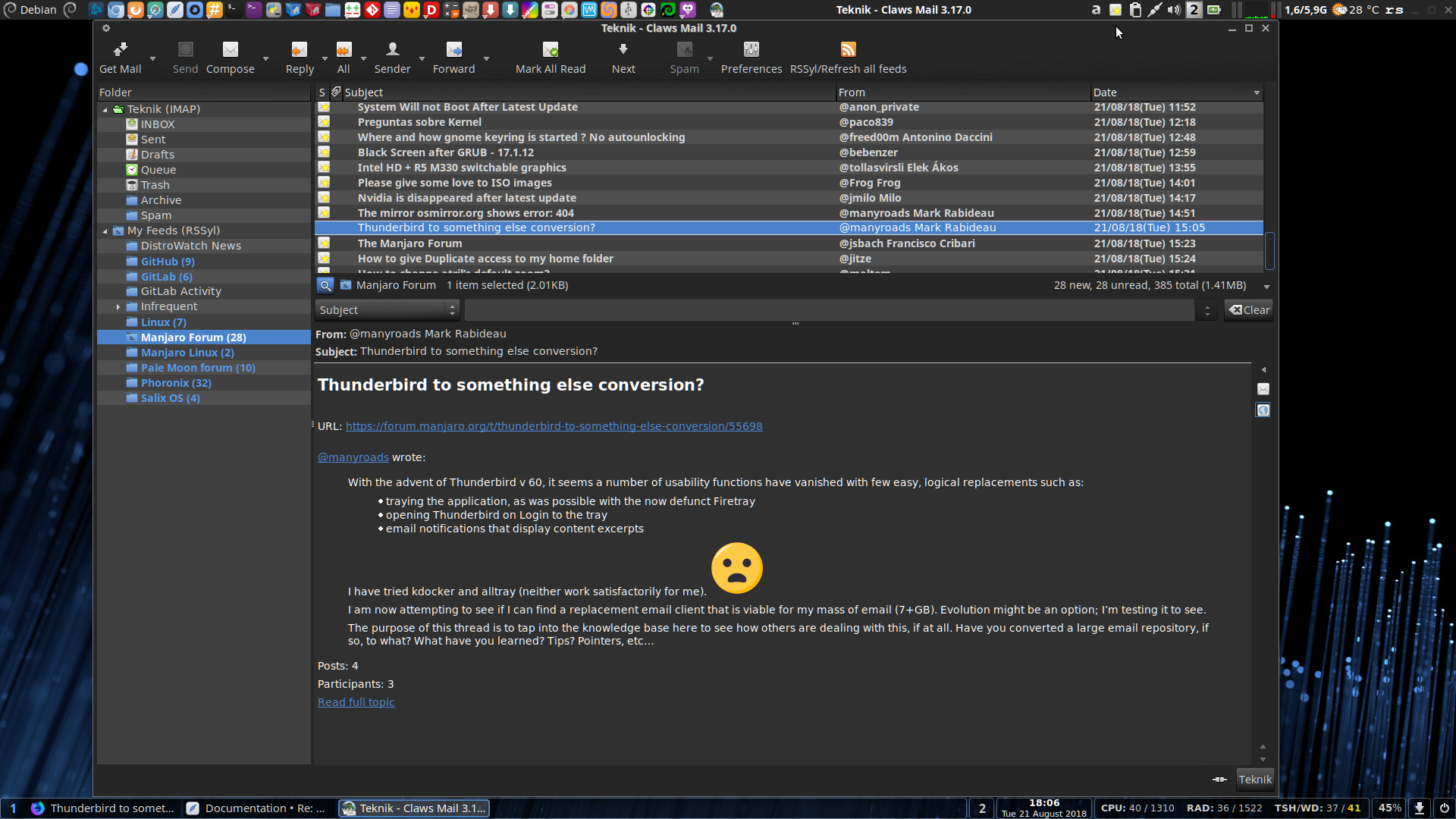 That's Claws showing this topic RSS feed, rendered in HTML with dillo plugin ( there's a webkit one too ), with tray icon indicating new messages just above the mouse cursor.

And the notification itself (on XFCE):

I've tried mail-notification, mailwatch (xfce), and gnubiff as notifiers. Each is disappointing. Mailnag is a reasonable possibility but I can't get the xfce plugin to build (my python skills are bleak).

I have feedback.....switching email clients is a huge PITA.

@dalto Yes switching is pain.... I am unable on XFCE4-gtk3 to receive any message beyond A pop-up that says I have mail. From Mailnag I can get a little ring... from xfce4 Mailwatch I get a popup (with dummy plugin content).

When I open Thunderbird I get Tunderbird not theme styled excerpts.

@rbrick49 did you find a way to transfer your pre-existing email folders to mailspring? The docs I read said it was not possible to do that....

As far as I know, Kmail has it all.

@svooo Sadly that doesn't help much with xfce, gnome or other DEs...

Maybe if it were available in a flatpak (but it isn't).

@manyroads, fair enough, if you are interested only on the email part of the thunderbird (no calendar or tasks support, rss, etc) then for the GTK based environments you may consider Geary, it has modern layout, but quite limited options, however, as far as I remember, it has all your mentioned 3 points.

Alternatively, for the Gnome (and maybe others ) you may use Evolution. For the Gnome there is an extension that watches for the new emails and notifies you (in the notification are you may see content excerpts as well) or make it autostart into a specific workspace. When evolution is opened you will get notifications as well.

ok thanks for the tip wasnt thinking

If you want a conky widget to inform you of Thunderbird (or any) email (imap), the text is below (feel free to edit it to suit your needs).

There is, as you may notice a small bug (special character) that appears on my XFCE4-gtk3 desktop. If I find the fix, I'll post it here. Enjoy. Comments, improvements, etc. are most welcome.

This topic was automatically closed 180 days after the last reply. New replies are no longer allowed.