For the past several weeks, using Blender on my Manjaro system has invariably led to the window manager/compositor apparently crashing and freezing.

The problem has two stages of symptoms.

These fatal freezes kind of recover, but not really. After several minutes, the desktop and all windows and applications still remain non-interactive (including keyboard volume controls)— But the on-screen buffer will seem to flash between the two most recent successfully rendered frames. That is: The mouse still moves, but I can't interact with anything using it, and when I try, the window on top (usually Blender, but sometimes also a web browser with a dropdown or video) will seem to flash between two recently displayed frames that were successfully rendered before the crash.

Using CTRL+ALT+F3 to switch to a different TTY almost always still works in this state. Once there, the console works as usually expected. top does not show any noteworthy RAM or CPU consumption. Processes can be killed from there (including Blender), but killing them has no effect on the visible state of the original desktop TTY. When I switch back, the windows belonging to the applications I killed are still visible, and they still flash between the same two frames when I try to interact with the desktop

I can also usually suspend the computer using a hardware control while it is in this more fatally frozen state. When I wake it back up (and presumably force GDM/X/Mutter/GPU drivers to be reloaded), the desktop's interactivity is usually restored on a superficial level. I can unlock the screen, any applications I killed beforehand will no longer be displayed, and I can drag and resize windows, as well as launch and use simple GNOME/GTK applications.

However, even after this partial recovery, there are usually still severe graphical glitches that require a harder reset to be fixed. The unlock screen sometimes fails to render half the text characters in its dialog, scrolling in gnome-terminal will sometimes leave pixel-high rows of dashed artifacts spaced across the screen, more complicated applications like my web browser continue to flash between two frames with no useful interactivity, and even in the best case scenario, the rendering/framerate performance in Blender is probably at least halved from what it usually is.

Restarting GNOME with "r" in the ALT+F2 dialog doesn't help, nor does using different versions of Blender (including official binaries with factory settings for versions that I'd previously used for months without issue), nor does enabling GPU debug flags when launching Blender.

Logging out and logging back in does fix it, however.

I originally suspected that I was running into VRAM limitations, as this started happening when I was using high-resolution textures and seemed to improve immediately after eliminating those. However, it's also happened when interacting with just the default scene, with a single cube and no textures or complex shading— after just a couple seconds of opening it, no less.

I have not noticed any anomalous system temperatures or loads associated with this. (My CPU temperature usually stays below or just over 60°C, while clock speeds and load are consistent with whatever I was doing.)

The fatal crash also seems to be inevitable even after I've closed Blender. As long as I've launched and used it at some point during the session, it's only a matter of time until everything freezes and breaks— even though everything seems to work perfectly until that time.

I have not noticed any unusual behaviour from any other OpenGL applications, nor have I noticed any erroneous behaviour that implies any individual application or underlying hardware is at fault. If it were a hardware fault, then I'd probably expect similar crashes (or at least some kind of glitch) to occur with other OpenGL applications, and I wouldn't expect the problem to be able to silently hide for a seemingly random length of time before manifesting in the same way every time. If it were an application glitch, then it shouldn't happen with the version of Blender that I've previously used just fine, and it shouldn't affect the entire desktop and all complex application windows in the exact same way.

Application windows fail to update and render, but the desktop-wide uniformity of the failure implies to me that it's due to the desktop environment failing to propagate input events and screen changes, rather than due to any application glitch. Additionally, the only specific anomalous effects that affect application content (beyond just freezing and flickering the frame buffer) are the GNOME cursor changes during the fatal freezes and the missing characters in the GDM lock screen after waking from suspension.

The issue seems to be high-level enough to not affect TTY switching and be reparable just by logging out and back in, but it seems to be low-level enough that it affects the entire desktop and all complex applications uniformly, while also being in a complex-enough component that the entire system can work perfectly for a long time between the initial trigger and the final freeze. This points me towards a problem with Manjaro's packaging of the desktop environment, compositor, window manager, and GPU drivers, or something like that.

Any idea what's happening and how to fix it?

My system details are below.

Hi, a similar thing happens to me too, but I'm using KDE instead of Gnome. It instead goes directly to freezing and repeating frames (Shown in the first part of the video). If I disabled compositing effects using Shift+Alt+F12 I'm able to alt tab to other programs but not to Blender, Firefox, or Discord and it glitches out (In the second part of the video). It stops when I kill the x server using ctrl+alt+backspace. 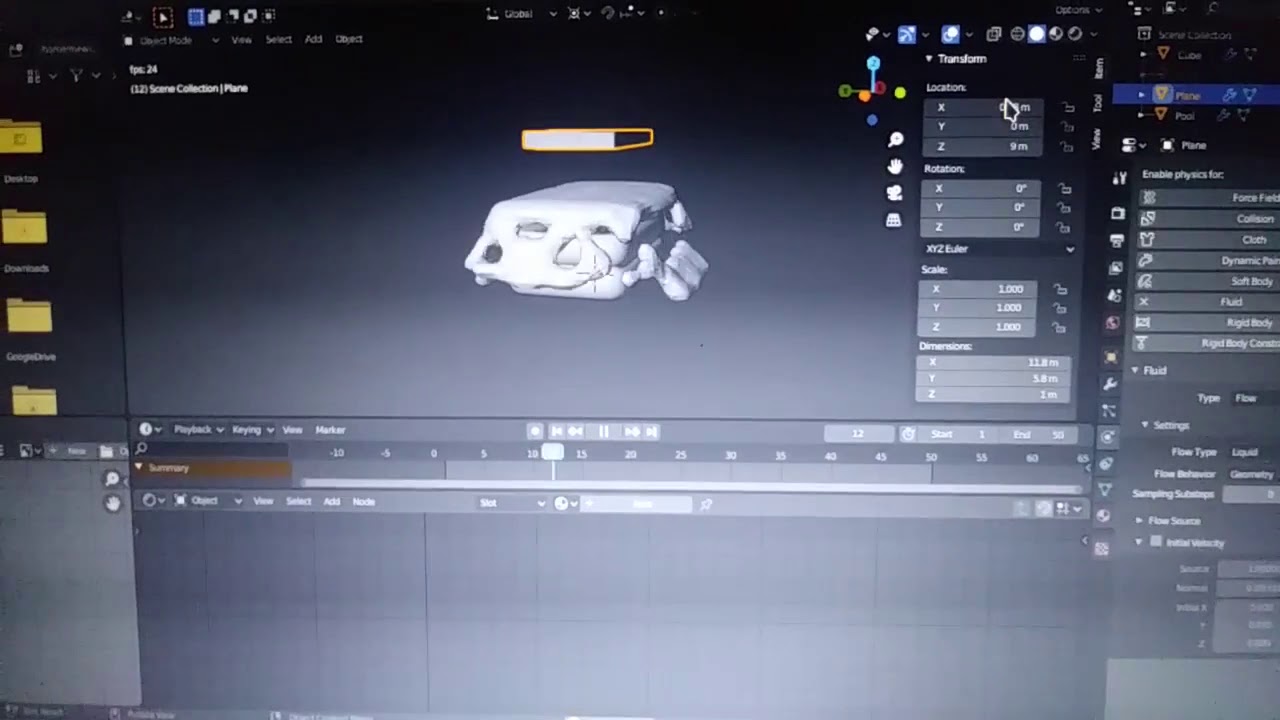 I even got Blender to freeze one time when changing the scaling of the interface in the settings.

I am also using Intel Integrated Graphics (HD 620) on a laptop.

Yeah, that's pretty much what ends up happening on my system too. It's very unpredictable and I don't even need to leave Blender open; as long as I've launched and interacted with Blender at some point since booting, the system will inevitably freeze and exhibit display glitches.

At least this confirms that it's probably not a hardware failure.

What kernel and Intel driver version are you using? You can check the kernel with inxi -S, uname -a, or Manjaro Settings manager, or the driver with pacman -Qi xf86-video-intel. Mine is in the OP.

Since we have two positive datapoints correlating this crash to Intel (U)HD 620 graphics, and some number of implicitly negative datapoints from people with different GPUs who haven't said anything about encountering it, I'm going to assume for now that a kernel or driver update broke an obscure feature or edge case. It's probably worth trying a different kernel to see if that fixes it.

The Blender version I was using is 2.83.2 from the repositories, I downloaded 2.82a from the downloads and it doesn't seems to freeze (yet) for the 2 hours I tried it.

It is incredibly inconsistent and confusing.

I also had problems with 2.82 and 2.81 from Blender.org. It was particularly annoying because it happened just enough to seriously affect usability and productivity, without happening enough to be easily diagnosable.

I switched to to the 5.4 LTS kernel though, and that seems to have fixed it for me for now. It hasn't crashed the whole desktop for the two days that I've used it since.

The second bug you linked (and the Intel driver bug linked from there) sounds pretty similar to the problems I had as well, although mine would sometimes last for more than a couple minutes before crashing, and I didn't figure out how to get the GPU error logs before switching kernels.

For the record: A post above this one is apparently going to be deleted in about twelve hours, and it says that they "had your exact same problem [...] using the same kernel [but] went back to Linux5.5.19-2, and it seems to have fixed it so far."

I changed it to the same version as you did and Blender seems to work fine now! Thank you for your help and that other person!

It's weird that the kernel causes a crash just in Blender specifically though.

Yeah, but GPU drivers and OpenGL support are extremely messy. Blender probably occasionally uses some specifically bugged combination of features that doesn't have any reason to show up in games or the desktop compositor.

What I'm now worried about is whether whatever change that broke things will reach the 5.4 kernel package eventually. If the bug's in the 4.19 series and the 5.7 series, then presumably it will get merged into 5.4 too at some point... It may be best to skip a couple updates, maybe until the bugs you linked have been fixed (as well as this one: https://gitlab.freedesktop.org/drm/intel/-/issues/2097), and then test Blender and be prepared to roll back once you do update.

Actually, yeah, there seems to be a lot of issue reports on the Intel driver code repository, all opened recently, describing the same or similar crash:

Intel Graphics for Linux - drm/i915 kernel driver repository. For issues only for now.

It might be worth waiting until most of those have been closed, and then waiting a couple more weeks for fixes to work their way into the repositories, before updating the kernel.